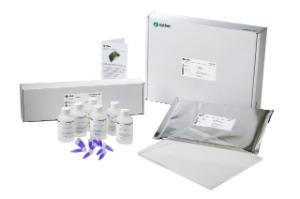 
DIGE gel should be used with the DIGE buffer kit, which consists of concentrated running buffers and sealing solution for attaching immobilinedrystrip gels (IPG strips) to the top of the polyacrylamide gel. The capacity of the buffer system is similar to the used laemmli (tris-glycine) buffer system, and the separation performance of DIGE gel is comparable to 12.5% laemmli gels (1). DIGE gel and DIGE buffer kit offer the high quality and performance of the laemmli system with the added advantages of convenience and time savings. DIGE gel is intended for use with the DIGE buffer kit and ettan dalt large vertical system. ettan dalttwelve and ettan daltsix instruments are designed for large-format, 2-D electrophoresis using either 18 or 24 cm immobiline drystrip gels. with ettan dalttwelve, up to 12 DIGE gels can be run simultaneously with separations complete in 4 to 6 hours. The DIGE buffer kit contains the amount of reagents necessary for a single run of up to 12 DIGE gels using the ettan dalttwelve electrophoresis unit, or two runs of up to six gels using the ettan daltsix unit.