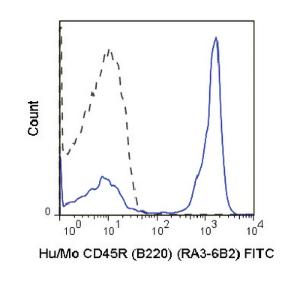 35-0452-U025EA 17.6 EUR
35-0452-U025 35-0452-U100 35-0452-U500
Anti-CD45R Rat Monoclonal Antibody (FITC (Fluorescein)) [clone: RA3-6B2]
Antikörper
The RA3-6B2 antibody reacts with the human and mouse CD45 isoform known as CD45R, or B220, a protein tyrosine phosphatase of 220 kDa. CD45 is one of the most abundant hematopoietic markers, and is expressed on all leukocytes (the Leukocyte Common Antigen, LCA). Various isoforms are generated and expressed in cell-specific patterns, all critical for leukocyte function. In mouse, the CD45R/B220 isoform is predominantly found on B cells, at varying levels on all stages from pro-B cells to activated B cells, and may also be detected on certain T cell and NK cell subsets. It is of note that B220 is not similarly expressed on human B cells, where it appears to be differentiation-specific and therefore expressed on only some B cell subsets. Other forms of CD45 with restricted cellular expression include CD45RA, CD45RB and CD45RO.